The first time I made a pie crust, I was fifteen years old.

So they were baking, and I was there, and somehow it happened that I was involved, and it was surprisingly easy for me to turn out a pie shell.

As a teen bride, I didn’t know how to cook. I could open cans and make steak with gravy.  I had a few cookbooks and I would attempt the recipes without all of the ingredients, usually with terrible results.

But I could make cherry turnovers and apple pie.

So Friday night I went to bed thinking I would go to the supermarket and buy a cake to bring to the dinner. Saturday morning I woke early and had coffee and started remembering all of this. I didn’t have proper equipment in my kitchen as a fledgling cook; it added up over time. I thought, If I could make a pie crust back then, I can make one now.

I borrowed the rolling pin from Miss July, my landlady. I gathered the ingredients and the only mixing bowl.

The two dinner knives were to take the place of the pastry blender, which for me was the greatest present my mom ever gave me. I had been married for a couple of years I think by then, and I was thrilled by how much easier it made the task of cutting the shortening into the flour. However, I had managed to make a lot of pies before it came along.

I don’t have measuring cups here either, so I guessed at the amount of flour and shortening.

And check it out, it worked. The flour had a good texture, if a bit high in gluten, the shortening was firm, and I figured out how to make the rolling pin work without handles. Voilà!

Then I had to mix the filling. 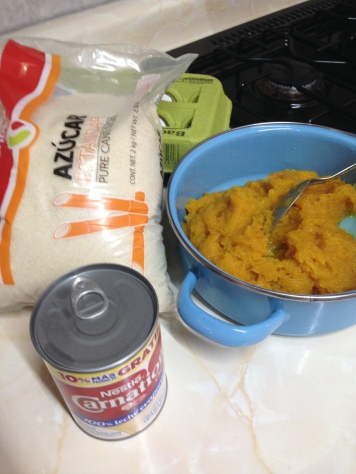 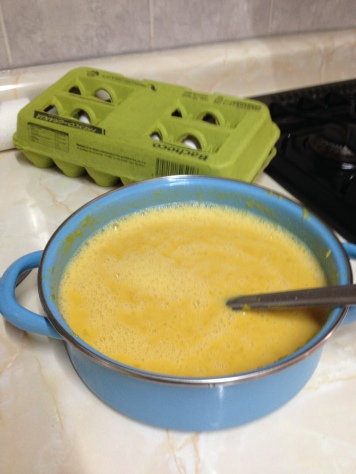 In my only pot, because the bowls are all too small.

And into the oven it went.

I guess in Mexico, they don’t need super-hot ovens–after all, they don’t bake pumpkin pies. I hoped “max” would be enough for the first fifteen minutes of baking time. The temperature for baking pumpkin pies starts at 425 degrees and then is reduced to 350. I turned it all the way up.

When the 15 minute timer beeped, I turned it down a little.

About five  minutes later, far sooner than it should have been, I smelled my pie.

Yes, I forgot to adjust the temperature to Celsius.

I never baked a pumpkin pie so fast before.

It was burned on the edges, and the filling was a little curdled, but it wasn’t bad. I cut out the burned section and took the rest downstairs to the family.

And of course made two more pies to take to the party. 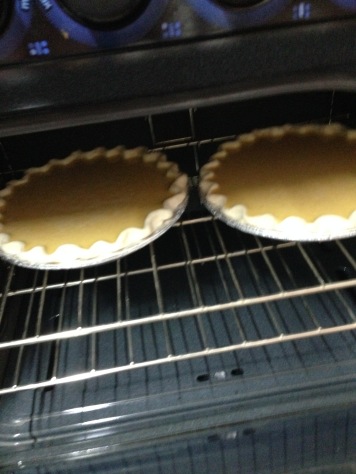 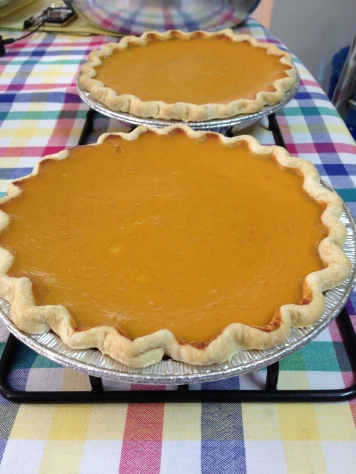 This time the oven wasn’t hot enough. I kept adjusting, but took almost two hours to bake them. I knew the crust would be hard on the edges and gluey on the bottom, but what the heck? The filling was delicious.

I’m staying here in Mexico for Thanksgiving. We have a week off school, and I have a lot of work to do. I hope to visit the countryside one or two days. The early dinner Saturday was the only Thanksgiving meal I will get.

But now I know I can make a pie any time.

Well, I still need to experiment with that oven temp . . .

Maybe I’ll get some frozen pizzas and cookie dough.

One thought on “American Pie II”