So I’m trying, with moderate success, to teach myself to expect the unexpected.

Lucky for me, there is a Facebook page for the school, and since a number of my coworkers left for Christmas vacation a day ahead of me, I saw numerous photos and comments about airport delays. So I really did expect that it might be the case for me, too.

We left Torreón on time. (The weather is almost always perfect here.) One of my coworkers was connecting in the same terminal as I was, and I had two hours before my flight, so we had lunch at TGI Fridays. Just as I paid the bill, there was a gate change announcement over the speakers. My flight was being moved from Gate 6 to Gate 23.

Well, I went to look at the board; it still read Gate 6. But sure enough, in a minute, it changed to 23.

I was going that direction when a bunch of people came toward Gate 6 saying that they had gone to twenty-three and that it was under construction, so they had been sent to Gate 4.

Now, Louisiana people are generally pretty easy-going. There was some mild complaining, but in general, everyone was pretty okay with it. So we sat down, and I started chatting with a young man from Lafayette about this and that.

Soon, we were sent to Gate 16. I was pretty interested–a new experience! That’s what I’m all about! A blog post was in the making.

We stood around for about five minutes looking at each other and then they announced that our flight was delayed, and changed us again, this time, back to Gate 4.  One obnoxious guy was yelling at the agent. He had PLANS!! (I don’t think he was from Louisiana.)  My new young friend went across the concourse to another agent to demand to know what was going on.

I sat on the floor for awhile, looking around, listening and watching.

We weren’t there more than 15 minutes when they sent us to Gate 30.

By now, even I was starting to get tired. I wondered if Ed Harris was watching from a sound room somewhere.

We walked all the way back to gate 30.

Well, y’all, that wasn’t the end of it, but eventually, after three hours of trotting back and forth, we made it back around to Gate 4 and there was an actual aircraft there, with people getting down, and the screen with our flight number and “boarding in seven minutes . . . three minutes . . . one minute . . .”

And then the desk agent made the announcement that the captain had said that it had been taking an hour to get refueled, so rather than have us sit in the plane for an hour, they would wait to board us until refueling was completed.

That did it. I’d had enough. Lucky for me there was a bar at Gate 6, because I was ready for a drink. I went and ordered a glass of wine. By the time we finally boarded the plane (four hours late), I was so tired and relaxed that I leaned against the window and dozed all the way from Dallas to Lafayette, even ignoring the bumpy landing. 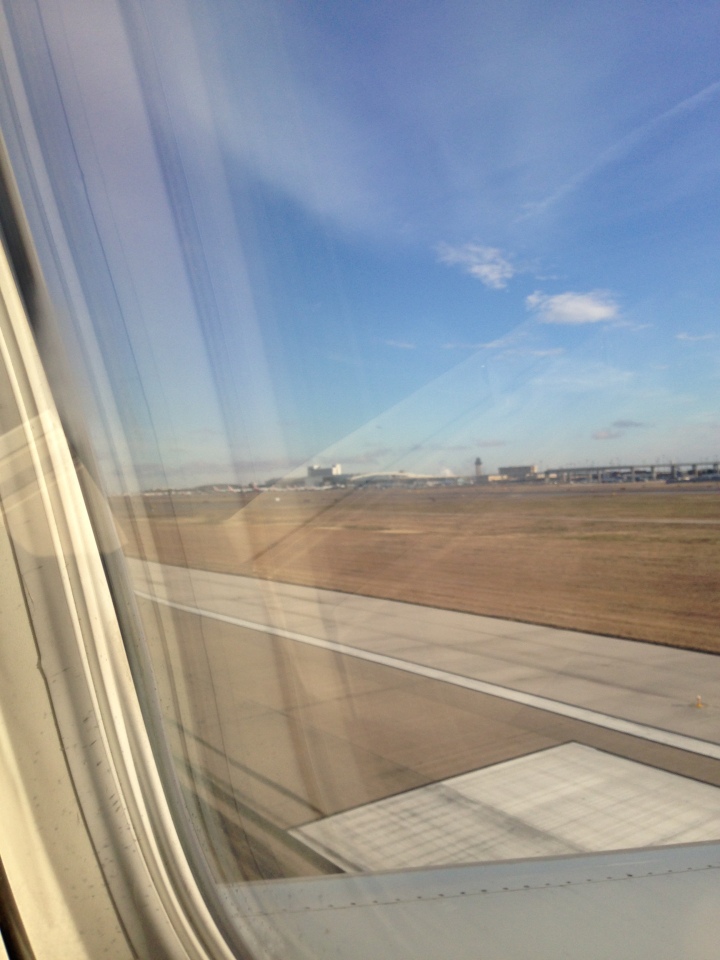 A four-hour delay isn’t awful. At least we were getting our exercise, and once I retrieved my luggage and left the Lafayette airport, none of it mattered anymore.

The next day, American Airlines sent me an email apologizing for the inconvenience and offering me 3000 Advantage points. I wrote them back and said I wanted 10,000.

I haven’t heard back from them.